This all started when I was given a copy of Baldur’s Gate: Descent into Avernus by Wizards of the Coast, and while I do think it’s brilliant, I wanted you to know they gave me one up front. However, this isn’t a review of that module. You see, Descent into Avernus is set in the world of Faerun, and starts in the city of Baldur’s Gate, neither of which exist in my Dungeons and Dragons games. I run my own campaign world — nothing fancy, but it’s mine — so I’m always faced with issues when a big module like Descent into Avernus comes out, and it’s a problem I’ve faced before. My last big D&D game was a 3.5 game in the 2000’s, and about half way through that campaign I got my hands on the Shackled City Adventure Path, a series of 11 or so linked adventures that would take your campaign all the way from 1 to 20 or so.

In each case, the problems are often the same — these big adventures take up a lot of your time, they contain locations that aren’t a part of your basic campaign, and they start at a level you’ve already passed. None of this is insurmountable, and there are a variety of ways to make them work in an established campaign. So here’s some ideas for you if you’re eyeing a big adventure and wanting to incorporate it into a game you’re already running.

Adapting the adventure to your party

Using Descent into Avernus as an example, my campaign has several big cities — Nazatan, Piador, El’Aran and Unes. I can transplant the opening from Baldur’s Gate to any one of those, and here’s a secret — it’s okay to steal literally everything in the Baldur’s Gate section, change a few names, and present that as having always been whatever city you choose. I’m leaning towards El’Aran, which is actually pretty heavily inspired by Athkatla from Baldur’s Gate 2 anyway, so there’s a sort of irony to importing chunks of Baldur’s Gate to stand in for that city.

This isn’t the only way to adapt it, though. When I did Shackled City, I straight up stole Cauldron, the starting city from that adventure and made it part of the world. Either approach can work fine, it comes down to what feels the most natural to your campaign. In the current games I’m running, just saying Baldur’s Gate exists on my world would feel weird, but Cauldron was lesser known and unique to the adventure I was running so I felt safer stealing it. 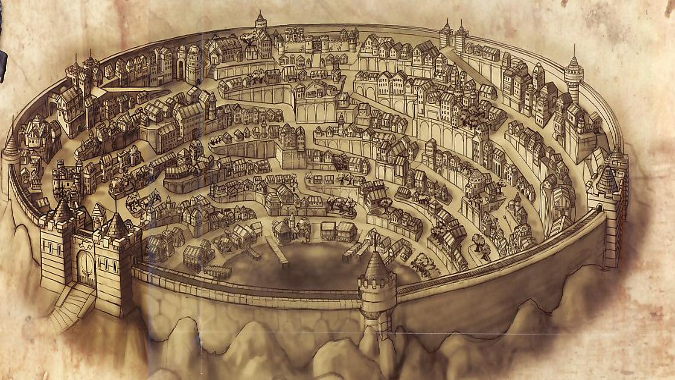 Cut what doesn’t fit your campaign

One of my absolute favorite old time mega-adventures is the Scourge of the Slave-Lords module, which combines four older modules into one. I love it for a  lot of reasons — it was one of the first ones I ever played and it’s hard as heck. You get kidnapped and stripped of all your gear at one point. But it’s very, very much set in Greyhawk, around the Nyr Dyv inland sea or lake, and that simply didn’t fit the campaign I was running when I decided to adapt it. I was running a game set on the world of Athas, also known as the Dark Sun setting. Slavery is a big part of Athas’ culture — an association of Slave Lords providing the Sorcerer Kings of Athas with the slaves they use to fuel their defiling magics and build and maintain their city states would be an even bigger threat than it is as it was originally presented, and there are no bodies of water or clerics of any gods on Athas.

So I jettisoned the entire setting, based the Slave Lords in the desert, and used the later module Slavers which was a continuation of the original module to fill in some gaps. Moving the Slave Lords to a series of islands on the shore of the Silt Sea — an ocean of dust and sand that had replaced Athas’ oceans eons in the past — and making one of the Slave Lords an actual Athasian Dragon instead of a cleric of the ‘Earth Dragon’ made it a suitable challenge for the players, and allowed me to space the module out so it lasted for almost two years.

Change anything — you’re the DM!

This is one that I think people miss when they’re trying to fit a published adventure of any length — it’s okay not just to adapt and remove things. Just because the module presents the story in a specific way doesn’t mean you need to use it as written. I like Descent into Avernus quite a bit, but I also think I want to space it out differently, put other locations and other adventures ‘between’ story beats. There’s nothing wrong with that, if it suits your game and your players to have a break between descents into literal Hell then put one in there. Send them to the Feywild or the Shadowfell or make up a land of sparkling magical ponies and rainbows — yes, that one from Diablo 3, go ahead and steal it — if it serves the story you want to help your players experience.

If you want to weave a whole sub-plot about a cult of Illithid-worshippers who eat brains and get magical brain diseases from it? Go for it. You’re the one who has to run things, so if you want to space it out so that it takes your party to level 16 instead of 13, go for it.

Remember, once you have the adventure in your hands, it’s yours. There’s no such thing as canon here. All that matters is making sure it works for your group.