Dragonflight is scheduled to receive a whopping six patches in 2023 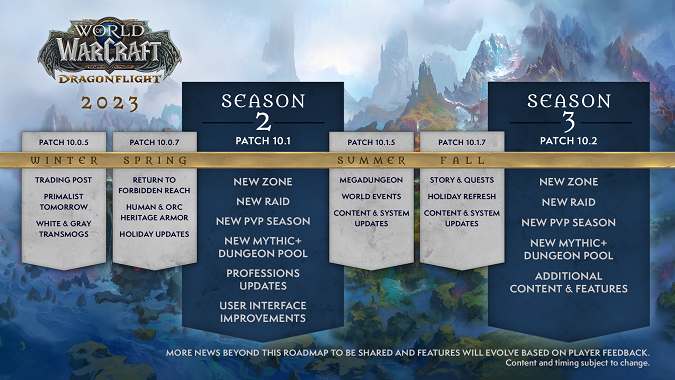 The World of Warcraft development team today unveiled their plans for Dragonflight during 2023 and it is quite ambitious: six content patches, two more seasons of Mythic+ and PVP, two raids, a megadungeon, new heritage armor quest chains, and not one but two updates to holidays. While schedules can slip, this level of detail is typically not revealed without some confidence that it can be met. The addition of x.x.7 patches is also a new direction for the franchise, and one that seems to indicate a more constant stream of content for players than previously experienced.

Patch 10.0.5 is already present on the PTR and the expectation of the Trading Post and white and gray transmogs isn’t new, however the confirmation that it will be arriving early in the year is a welcome one. The Primalist Tomorrow was only first mentioned in this week’s PTR development notes and has not been tested yet, but it appears to be similar to the invasion mechanic that has been a frequent post go-live activity for the past few expansions.

Shortly after 10.0.5 goes live we’ll get patch 10.0.7 and a return to the Forbidden Reach zone which has so far only been used for the Dracthyr starting experience. A new campaign quest as well as outdoor content (world quests should be expected, as you can already look at the zone for them in the app) will arrive, but more importantly the story will set up the events in patch 10.1. The Human and Orc Heritage Armor quest chains are also scheduled to be added with this patch, along with the first pass as updating holidays (perhaps Theotar has been hired to help).

Patch 10.1 will be the first of two major updates in 2023, with the standard new season content including a new zone, new raid, and update to which dungeons are in the Mythic+ pool. The Dragonflight overhauls of professions and the user interface continue in this patch as well, with the expectation that significant feedback from the first month of the expansion will be addressed.

The second wave of patches have fewer details, but we should expect similar content rollout over the second half of the year. A Megadungeon is scheduled for patch 10.1.5, and patch 10.1.7 will add more improvements to the holidays. Patch 10.2 is set to be a standard Season patch but nothing else is known — it doesn’t get vaguer than “additional content & features”.

That said, the sheer volume of information being released with the schedule far surpasses anything the WoW team has given the players in the past. Knowing the plans for Dragonflight — even if they slip due to unforeseen circumstances — will really help to placate those still wary because of the delays in Shadowlands. In addition, those still on the fence about acquiring a 12-month sub can feel more confident that there won’t be any significant dead space over the course of the year. While we don’t have all the details about the Primalist Tomorrow, things are definitely looking positive for the Azeroth Tomorrow.