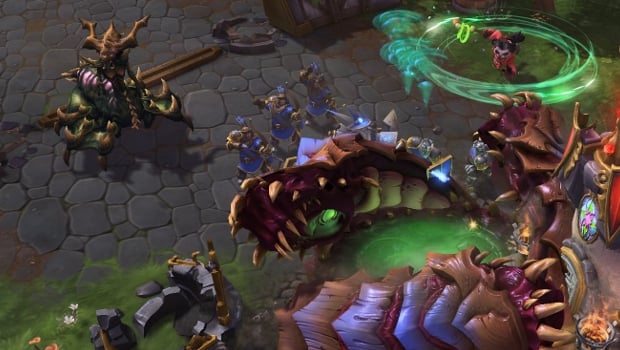 If you’re new to Heroes of the Storm, the very first thing you need to do to play is choose a hero. But how can you know which hero is the best for you? Don’t worry. That’s why we’re here. Heroes come in four basic types: Warriors, Assassins, Support, and Specialists.  This installment is all about the Specialist role.

Specialist heroes are the unique snowflakes of the Heroes world. Each Specialist is very different from most other things you’ll see in the game, so if you enjoy Sylvanas you may hate playing The Lost Vikings. If you’re completely new at the game, it may take you a while to figure out how to play around these wild cards. While there are some similar traits in each of the other three categories, in this one each hero has completely different strengths, weaknesses, purposes, and gimmicks.

Virtually everything Abathur does is wrapped up in his Symbiote ability, so don’t report him AFK (and yes, this is an actual issue you will deal with if you elect to play Abathur). With Symbiote, Abathur inhabits a friendly player, minion or structure, but his body stays behind. He gets an additional set of abilities when he uses Symbiote, to shield, attack and otherwise help out that friendly without putting himself on the line for a kill. He can even Symbiote minions in an otherwise empty lane to soak XP. You will want to stay close enough in lane to make your Locust Strain trait do a little damage, but the closer you get to the action the easier he’ll be to spot by the other team, and Abathur is one of the squishiest, slowest heroes in the game when he’s caught in the open. Your Heroic ability is largely dictated by your team comp. Keep in mind that if you choose Ultimate Evolution, you don’t get your target’s talents or Heroic, and dying gives the opposite team XP. 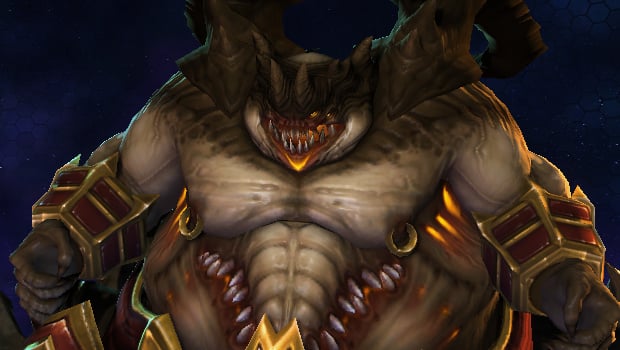 As the Lord of Sin, Azmodan has many demons at his command, and he uses them as a powerful siege mechanic. He can summon a number of different demonic minions, which deal damage and soak up lots of ammo from towers. Especially in early game, he commands a very strong lane presence, though an opposing hero with good AOE can decimate his army pretty easily. In fact, they can generally decimate Azmodan pretty easily — he doesn’t have any escapes, so you have to plan ahead and try not to get caught in the open. His non-demon DPS moves are made for demolishing groups of lane minions too. His most popular build involves building stacks of the level one Taste for Blood talent to ‘Azmodunk’ groups of heroes from a very long range. If you choose this route Black Pool can give your DPS a boost, but because you need to stay inside the pool it cuts down even further on your limited mobility in a team fight. You gain that mobility back with Demonic Invasion, but it doesn’t do nearly as much DPS.

Also, if I may editorialize, those nipple rings are absolutely mesmerizing.

Gazlowe’s abilities revolve around mechanical power and his trait. Whenever one of Gazlowe’s turrets or a structure is destroyed, it creates a little glowing blue screw on the ground that Gazlowe runs over to pick up, and this restores mana so that he can create more turrets. He’s not a favorite in the current meta because he’s got a bit of a ramp-up with the turrets, ramp-up time for each of his abilities, plus low overall DPS to boot. He can still be fun to play, but if you’re outside of Quick Match or AI matches you may get some grumbling from your team if you choose him. Grav-o-Bomb can help set up really deadly combos in team fights, but Robo-Goblin helps him lock down a lane.

Like most tadpoles, Murky is extremely squishy. He makes up for this by having a mere five second respawn timer as long as his egg is up, granting a small fraction of the XP on a kill normal heroes do. The egg is key to playing Murky. With correct placement, he can continually harass the opposite team. He has decent talented ability synergy toward the end of the game, but in general, Murky’s role is to annoy the opposite team with slime and exploding fish, then try to get out, maddeningly, before he gets stomped. Both of his Heroic abilities can be interrupted and are tough to use. Octo-grab can add a stun and is channeled while March of the Murlocs is an AOE with a cast time. I tend to prefer the cast time because it gives a shorter cooldown, but if the channel is interrupted, that’s it until the full cooldown is up. 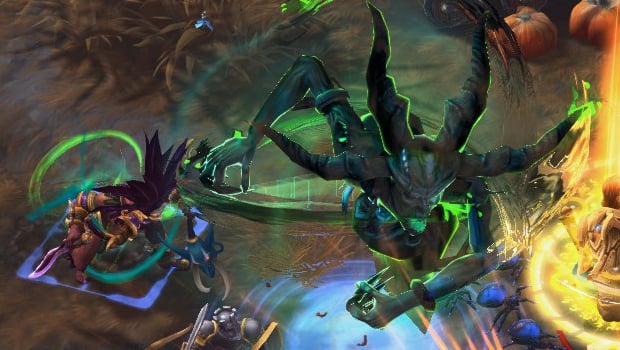 Diablo‘s Witch Doctor deals in a lot of DOT damage. His abilities add the DOTs and his trait, which rewards you for killing things while they have a DOT on them, directly benefits from this as well. With this and his trait, he excels in lane, and depending on which talents you choose he can become almost tanklike. His Zombie Wall is a very effective (and a little bit scary!) crowd control move, but the collision mechanic can also hinder your team, so be careful. Nazeebo can really begin tearing down those structures if he selects Gargantuan as his Heroic ability. Ravenous Spirit has fallen out of favor because Nazeebo has to channel it while it’s active, and not only does this make him a sitting duck, but the meta is relatively stun-heavy, making channeled abilities typically a liability.

As a siege tank, Sgt. Hammer has very low mobility. She doesn’t even have a mount. Her Z key is like a short-term sprint to get her out of the line of fire. Her strongest move involves her rooting herself into place, with a second to both engage and disengage Siege Mode, so keep that in mind when the action gets hot. When she does dive into that tank, she can out range any structure except the core, and she deals additional siege and splash damage while she does. She can have a hard time making kills solo before she gets her heroic abilities, because pretty much anyone can just run from her. Her skill shot Blunt Force Gun will help with this, but it’s on a very long cooldown so it’s best to use it when you know you can kill your opponent. Napalm Strike is a strong AOE, and has a short 6 second cooldown, leading to better DPS overall.

Sylvanas’ Specialist designation is wrapped up in her Black Arrows trait, which can keep a lane locked down for a long time while building up a contingent of friendly minions. The additional perk is that she deals a ridiculous amount of damage. Her Withering Fire ability can either be used to keep a second target locked down, or to deal even more burst damage. The trade-off is that she is extremely fragile, even if she takes talents that heal her, so save Haunting Wave to escape over terrain. Her Possession talent is still in dire need of a re-work so for now, choose Wailing Arrow. 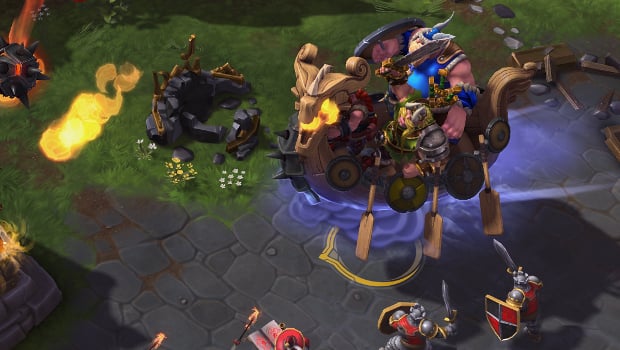 Even among the unique Specialists, the Lost Vikings stand out. You can control Olaf, Baleog & Erik separately or as a unit, with each Viking kill counting as a third of a normal hero. The Vikings are the only hero that starts out with no basic ability, and has to talent into each one (if the player chooses). They excel at splitting up to help their team soak XP in vacant lanes while the rest of the team pushes, or capturing map objectives while the rest of the team goes for a big team fight. This hero is especially difficult to master. Take a few rounds in AI or even Practice Mode with this hero before you venture into more difficult matches. Longboat Raid tends to be the preferred Heroic Ability because it deals good damage and lends a second health bar, but if you’re on a particularly large map, Play Again gives the Vikings mobility they otherwise lack.

A big component to playing Zagara well is having the spacial awareness to use her Creep Tumor trait to its fullest. Her Creep not only grants her health regeneration, but gives her team a lot of visibility across the map, as each circle of Creep is revealed in the Fog of War. All Zagara’s normal abilities spawn small zerg minions that do her bidding in one way or another. Zagara can use these as additional meat shields to absorb additional tower hits, making her an excellent choice in lane, but make sure you’re still trying for those objectives so your team isn’t 4v5! Devouring Maw is by far the preferred Heroic Ability, especially if you’ve got a team with really good AOE damage. It will suck up all the opposing team members caught in its circle after a short delay, then spit them back out. If Zagara gets caught too early she can Devouring Maw while she waits on her team to catch up or bail out completely, but by far its best use is having your team time their AOE for when the opposing team comes back out.