Overwatch has gotten a bit of a reputation for toxicity. It’s so bad that the developers recently organized an anti-toxicity strike team to combat the growing problem and find ways to make the game’s community better for everyone. This is just the latest in taking measures against toxicity, with improved reporting functions added earlier this year, including notifications when someone you reported is auctioned and report systems added to the console version of the game.

Toxicity seems to unfortunately be a staple of gaming these days. While it’s nice to see measures taken in Overwatch to stem the ugly tide, other games are still rather behind. If all goes well they’ll add the system to Heroes of the Storm, which has a similar problem of abuse in matches, but WoW just kind of languishes. It’s not like toxicity is taking over WoW, but it’s not all sunshine and roses either.

I generally keep to myself and my guild, yet I’ve seen all kinds of toxicity in the nine years I’ve been playing. I’ve had a random dungeon tank call me slurs because I didn’t get into the boss room fast enough. I’ve seen other groups where someone exploded with obscenities at another person for something innocuous. I’ve watched groups of players grief LFR and try to vote-kick anyone who pointed it out. A former guild had a “fan” who constantly whispered all guild members online and made daily forum threads because he had a vendetta against the guild leader. Someone even got mad enough to make a Twitter account to harass me and call me names. 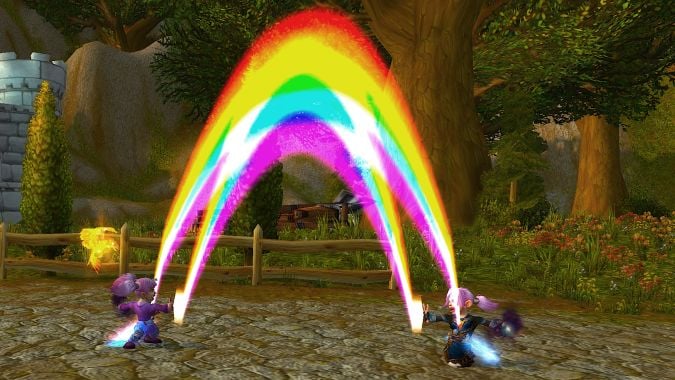 Part of the problem is size and scope. Overwatch has over 30 million players, but they’re grouped into party chats. We don’t know exactly how many players WoW is at — it may have been back up to 10 million after Legion’s launch — but we could probably guess around 7 million subscriptions. Even though WoW has less than a third of Overwatch’s players, the ability for communication is far more widespread and players just encounter more people on a daily basis. We have trade chat, general chat, guild chat, party chat, raid chat, battleground chat, character whispers, Battle Tag whispers, custom channels, and so on. There are a lot of avenues for people to be toxic if they so choose.

Unfortunately WoW’s report system is lacking and has changed little over the years. Disciplinary action also relies heavily on the players to do the reporting, which falls through if you’re the only person someone is being toxic to. There was a silence feature added at the beginning of Legion, but we haven’t really heard much of it after players tested the system with mass reports on innocent messages and found silences despite the assurance that penalties would be reviewed. Overwatch seems to be the initial testing ground, much like Heroes of the Storm put in a silence feature a year before WoW. It’s nice that they’re doing so much to make Overwatch a better place, but WoW could also use a little more attention.

Or maybe just a dinosaur to eat mean players. That would work too.