Every cinematic and trailer released at BlizzCon 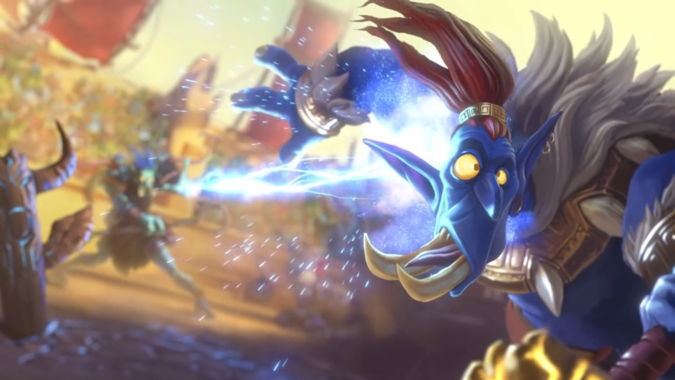 As far back as I can remember Blizzard has been known for their amazing cinematic trailers, and this year’s BlizzCon was no exception. We got everything from breakfast cereals to intense standoffs between cowboys and leaders of armies. But in case you missed anything, We have the round-up of every game’s trailers and cinematics for you right here. Don’t worry if you missed any of our other BlizzCon coverage we have roundups for Friday and Saturday here for you!

Now let’s get to the cinematics.

For Diablo Immortal, we’ve got one of the most visceral trailers that we’ve seen yet for any of their games. We follow along with a Barbarian — that looks suspiciously like our very own Matthew Rossi — as he cleaves and whirlwinds through demons. The whole thing ends on a shot of a very angry looking demon. We know that Diablo is out of the picture in this game, which is set between Diablo 2 and Diablo 3, which makes me wonder who or what that is!


Gameplay-wise we also had our first look at some of the skills we’ll be wielding against the Demonic Hordes and their Infernal Masters. At one point the Barbarian picks up one demon to throw at another demon! Is there anything more Barbarian than that? We also get some great looks at new areas and setpiece encounters — including a very interesting looking segment where the Wizard rappels down a shaft and has to fight demons while dangling from a rope. I really want to know how that works, is it the same for every class? Do other heroes get different things to do? Does that make me your friendly neighborhood Spider-Wizard?

The latest Hearthstone expansion treats us to another great song! These are my favorite parts of their expansion announcements, and this particular song was even written by Christie Golden! It’s got a great jungle beat and fantastic Troll on Troll totem action. I don’t think that I’ve wanted a pair of shoulders more than those amazing frog shoulders that the first Troll has. Fingers crossed we get a Loa raid in World of Warcraft so I can get my hands on them.


Ben Thompson and Peter Whalen are spectators at the Gurubashi arena for the full announcement trailer. We’re introduced to the new mechanic of the expansion, Overkill, and also given a first look at the Paladin class Loa — Shirvallah, the Tiger. We’re also subjected to a lot of truly, amazingly bad puns from Ben.


Heroes of the Storm

Orphea bursts onto the scene with a big attitude for such a small character. As the first wholly original Nexus character in Heroes of the Storm, anything less would’ve been too understated. Taking on the Raven Lord in single combat we get a taste of what kind of power Orphea can wield. There’s a great melding of animation styles that gives it a very crisp and vibrant feel.


Putting the spotlight on Orphea, you can see just what you’ll be able to do when you get into the Nexus with her. She’s a high skill-cap hero that is going to reward careful play and landing combos. All culminating in a great big chomp!


And what about skins? Raven Crest high school needs a good cleaning, and the only hero that’s up to the task is Leoric. It’s a bit of a step down from being a King, but a job’s a job. Knowing the Heroes team, there’s probably an easter egg or two hidden in the background that lets us know who the next hero is.

Start your day off with a Boost with Lucio-ohs! I think this was one of the bigger surprises of BlizzCon because they actually exist. They’ll be in stores soon!


And for cinematics, McCree gets his chance to shine (though someone comes along to steal the show). This latest movie from the Overwatch team just really shows how much we need them to do a Netflix series already. The work they can do is amazing! We get authentically crumbly pie, a Kerrigan cameo in tattoo form, and McCree riding off into the sunset — like every great cowboy! We also finally get Jennifer Hale as part of the Overwatch family!


Knowing that we wouldn’t be satisfied, Blizzard even made a little epilogue for the short where we get to see just how much McCree gets under Ashe’s skin. Having seen this, I’d love if they went back and gave us epilogues for every other short they’ve produced.

Next, find out just how you can wreak havoc with Ashe in this intro video. Just make sure you stay on her good side, or you’ll find out just how good of a left hook she has. She also doesn’t travel anywhere without her faithful Omnic companion B.O.B. and you really don’t want to get on his bad side either.


But just who is Ashe? Go back to where it all began and learn what makes Ashe the villain she is. It can’t be easy having everything you want at your fingertips or your very own robot butler. It’s a good thing that she was able to find a new family and a great hovercycle.

Warcraft 3: Reforged is on the way and the Reign of Chaos has never looked so good. I can’t wait to see Archimonde taken down by a swarm of wisps in beautiful 4k high definition.


The updated graphics are amazing. Even more so since this was all built in the original Warcraft 3 engine! Letting anyone who has a copy of Warcraft 3 — old or remastered — play against each other is great for the community, and must’ve taken a lot of work. You can really see all the care and attention that has gone into each building and unit. Just look at all those happy little spikes on each of the Orc buildings.


All of the new hero units are great looking. The new Mal’ganis looks like he’s ready to burn Stratholme to the ground all by himself. Although it is a little weird hearing the original voice lines remastered. That’s not the Jaina that I’m used to hearing.

Right out of the gate Warcraft introduced us to the newest charity pet. The adorable baby Yeti Whomper! All they wanted was to be petted. Luckily that Pandaren was there to take care of them! Remember that anyone who buys this pet before the end of December will help contribute to a worthy cause.


But if you wanted serious over silly, the cinematics team has that covered, too. “Lost Honor” is the latest Battle for Azeroth cinematic to focus on Saurfang. King Anduin goes to pay him a visit in the Stormwind Stockades to try and find an end to the war before the cost gets too high. What we’re treated to is an amazing confrontation between two characters that obviously respect each other and want to try and find a better solution. The whole Blizzard team has been doing some of their best work with these closer looks at Saurfang. I can’t wait to see where this leads.


Then there’s “Terror of Darkshore,” which shows us what happens when Malfurion finally wakes up. With a great horror movie vibe, we’re shown a Horde caravan whittled down one by one until there’s just a single Troll left. Malfurion is sending a clear message to the Horde that the Night Elves won’t rest until they’ve gotten vengeance for Teldrassil. Speaking as a Druid player, I want to know how long until my Entangling Roots works like Malfurion’s did in the video. Terran Gregory and his crew just keep setting the bar higher with every new piece that they work on.


What was your favorite cinematic? Is there anything that you wish we’d gotten to spend more time with?