We’re pretty excited about Torghast, Tower of the Damned, and though it isn’t in the Shadowlands alpha (yet), Blizzard just unveiled the first new information we’ve gotten on this roguelike mode since BlizzCon. Torghast feels like it will be a beautiful evolution of the Horrific Visions that we’ve been playing in Battle for Azeroth.

The main influence that’s on display is the roguelike genre, which can best be described as games where each run always starts you at the beginning — there’s no saving your progress. You have to win or you perish.

The maps and dungeons are procedurally generated too — like the dungeons and Rifts in Diablo — so every run is different. As you explore you’ll find random power-ups or new weapons and armor that’ll help you delve further into the dungeon. But if you die you’ll have to start over at the beginning with none of the collected gear from your last run.

If you’ve ever played FTL, Dead Cells, Rogue Legacy, or Enter the Gungeon you’ve played a roguelike. But Torghast is the first time we’ve seen this kind of mechanic in WoW. 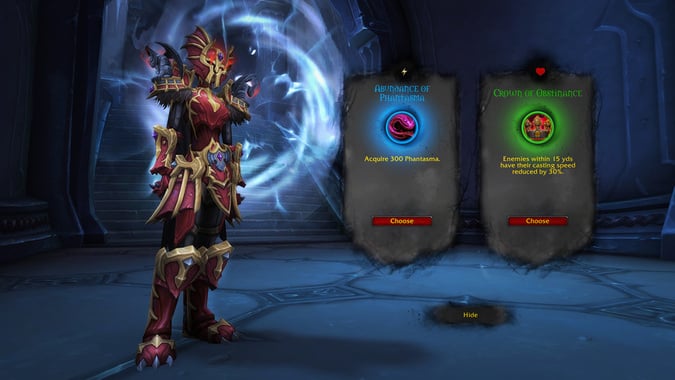 The mechanics of Torghast

Torghast promises a randomized layout every time we enter. Just because a room had a treasure in it the last time you visited doesn’t mean you’ll find the same room this time. As you climb higher in the tower you’ll also have to contend with intricate puzzles, traps, and even locked doors that will bar your path. The tower itself will start to fight you.

It will also have Anima power-ups and a new currency Phantasma. Anima powers will jazz up one of your abilities or Covenant powers and will be found on monsters, by exploring, or even in chests. Phantasma is the ghostly new currency that will only be used while you’re in Torghast. There’ll be vendors scattered around the floors who will exhange it for Anima powers or consumables. You’ll just have to use it before you leave, as it’ll disappear after your run. Wowhead has found some early examples of powers that include things like spells becoming instant but having a Phantasma cost, or Mind Control letting you rifle through the pockets of enemies for a few extra points of Phantasma.

Take your time… until the Tarragrue shows up

One of the biggest issues that people had with Horrific Visions is the sanity meter. Having that ticking clock forces you to always be moving forwards, which could lead you to make mistakes in your haste. Some players really like being able to plan out each of their pulls and make sure that they’re not putting themselves in undue danger. Torghast gets rid of the clock mechanic entirely with your new worst enemy — the Tarragrue.

The Tarragrue sounds like the most unholy combination of the Tarrasque and Grue, two of gaming’s most infamous monsters. The Tarragrue will show up if you die too many times on one level, and once it appears it’ll slowly make its way from the entrance to the exit of that level. If it reaches the exit before you, you’ll fail. If you’re spotted by the Tarragrue it’ll chase you down and turn you into much flatter version of your former self. You’re not intended to fight the Tarragrue at all — but there is a hint that there may be items that can slow its progress down.

I love this mechanic. It’ll only show up as you die on each floor, and even if it does show up you’re not out until it reaches the exit. If you can make it off that level you’ll be free of the Tarragrue and able to continue your run.

What are the rewards from Torghast?

It’s looking like the main reward for spending more time in Torghast is the legendary materials you’ll be able to find in chests. You’ll take these to the mysterious smith who was responsible for crafting the Lich King’s Crown and Frostmourne. He’ll use them to help you craft your own legendary items for use in the rest of the Shadowlands. We’re still early in the testing so it’s hard to say if there’ll be other rewards that we take from Torghast as we go. It’s likely there’ll be achievements for higher floors, and I wouldn’t be surprised if there are mounts and titles associated with those.

Maybe you’ll get your very own Tarragrue to ride?

I love everything that I’ve seen so far about Torghast. The biggest questions that remain are how often you’ll be able to get the good rewards from the runs and what the cost per run is going to be. We’ve seen the issues that have popped up around getting enough Coalescing Visions to enter a Horrific Vision, and then losing all of those if you fail. Not only did you not get any end of run rewards, but your key was gone and you had to re-earn the Coalescing Visions. That was was further compounded by them being tied to the weekly assaults and a limited resource.

Hopefully, the developers listened to that feedback — because everything else about Torghast looks fantastic.