Tracer nerfs, Dehaka on rotation, and a mystery dragon in the Nexus 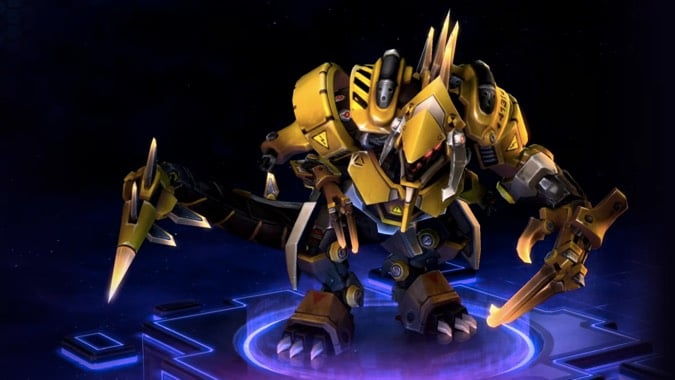 This week  in Heroes of the Storm we’re welcoming relative Nexus newcomer Dehaka to the free rotation for the first time. While I have zero advice on playing Dehaka, I absolutely recommend playing him with his mecha skin. Just look at it! Glorious.

Of course it’s never all good news in the Nexus. While everyone’s getting their first chance to check out Dehaka for free, new hero Tracer is getting some nerfs only a week after going on sale. Even though Blizzard seems a bit surprised — commenting that Tracer can be “an absolute terror” in the right hands — we’re pretty sure you could set your watch off how quickly new heroes get nerfed in the game. When great design ideas meet a huge, enthusiastic playerbase… well, sometimes things don’t go quite the way Blizzard intends.

And coming up, Blizzard has teased what we suspect is a new hero… and while we don’t know much, we’ve got some guesses. So let’s take a look at the changes coming to Tracer alongside this week’s hero rotation — and, as ever, commentary from the team.

Developer Comments: As we’re sure many of you have noticed, Tracer is performing just a little too well on all fronts. While we are excited to bring her to the Nexus, we understand that in the right hands, she can be an absolute terror to the enemy team. We’re lowering her Health, Basic Attack damage, and increasing Recall’s cooldown to make her less universally powerful. We’re going to be giving back some of that Basic Attack damage on her Level 16 Talent tier to further separate Sleight of Hand from the other options, which should help the choice between more Pulse Bomb charges vs. stronger Basic Attacks feel like a more meaningful decision.

We also saw an opportunity to help improve her Talent pick rates, so we’re making minor adjustments to Pulse Strike and Slipstream.

We’ll continue to keep a close eye on her, as we believe she is similar to Illidan, where the right place from a balance perspective is more narrow than most of our other Heroes.

Anna: She’s still going to be a force just because she’s so freaking mobile.

Mitch: The Tracer changes aren’t really that drastic; just adjustments to even her out.

Liz: Considering how Tracer’s been performing, I wonder if this is just a first step. We’ll have to see how she plays this week.

Is a new dragon hero headed to the Nexus?

Nerfs aside, Tracer was the last new hero on the release schedule, which leaves us wondering who — or what — is next. Fortunately, Blizzard has released a tiny teaser that suggests the next hero may be dragon-y in nature. Onxyia? Deathwing? Heck, we’d play either.

Keep your eyes on the skies, Heroes. pic.twitter.com/u5Chkd95QV

Mitch: Butcher got a buff to his self-healing recently. It heals for 50% instead of 25% now, so if you’ve tried him in the past, give it another go and never forget to use his self-heal. He’s squishy but strong as Hell. Which is where he’s from.

Mitch: My favorite hero of the game, Greymane, got a nerf to my favorite talent recently. If you’ve ever played him and picked up the talent that let you throw your cocktail anywhere, you’ll be in for a rude awakening. The nerf makes sense because throwing that anywhere was really strong and a more or less default pick but still, it kinda sucks. That doesn’t stop me from viewing Greymane as one of the best heroes in the game though. So give him a play and marvel at the solid mix between melee and ranged capabilities! Also be careful not to get overzealous as a Worgen. Roll out the second it starts to look bad. GREYMANE GREAT MAIN!!!

Anna: For ten thousand years Illidan has been banished from his homeland in the pros, and now they dare to pick him. You are not prepared for deep dives and evasion! Heroes good at disruption with stuns and a good sense of timing are a must if you start seeing more Illidans than you’d like. And really, with him all over Legion, any more Illidan is really overkill. ETC, also on rotation, makes for a decent counterpick.

Mitch: Illidan I haven’t played much but holy crap he’s been strong since his buffs. I’m hoping him being free counters some of the insane destruction I’ve seen him do lately, but be aware that in good hands he will just destroy you.

Anna: Jaina has been gradually slipping off the radar in pro games, but she’s still a favorite of mine. Her wave clear and zoning capability is incredible, even if she lacks the raw power of a post-tuning Kael’thas. The biggest issue I’ve had with her is related to positioning. After her level 16 power spike with the Northern Exposure talent choice, it’s easy to get thirsty and edge in too close to the fracas in an attempt to Cone of Cold as many of the opposite team as possible. Jaina is far too tempting a target for that kind of boldness. Getting a juicy vulnerability boost on just one hero means your team can completely obliterate them in an instant, and you’ll live to fight another day.

Anna: Gazlowe is an odd duck. He’s quite unique, and I’m not sure the dev team knows what to do with him. He’s one of the best in the game at zoning, meaning he sets down area spell effects which makes the other team reconsider their positioning. Sometimes your opponent will have to consider whether facing Gazlowe’s shenanigans head on or losing an objective is more important. However, this frequently means that he doesn’t do a ton of damage against players as they just side step his best tools. However, he makes an incredible jungler, an asset on maps like Blackheart’s Bay, and if you set down one of those turrets in a big team fight they can really hurt your opponent before they figure out what’s up. It’s a turret. Shooting them. In the face.

Liz: Why the heck is it that I (and apparently everyone else) find basic hero staple Raynor dull but still enjoy other basic heroes, like Li Li and Valla? Raynor is hardly the only simple hero here. Li Li’s a very straightforward, no-targeting support — click, heal, done. I don’t know why I find playing Li Li fun but playing Raynor a bore.

Joe: Li Li and Lt. Morales are probably the best supports I’ve played in a game of this nature in a while. Amazing heals, great group buffs, and strong enough to make your opponent weep just by seeing them on your team. Yes. Yessssssssss gooooodddddd.

Mitch: I do find Li Li boring. You literally just have to hit buttons near people to be effective. Valla, IMO, has enough talents that alter her abilities in fun ways that she doesn’t feel like Raynor. Outside of Raynor’s ultimate, it’s hard to tell what talents he’s picked. I can’t say the same about Valla, though, which keeps her playstyle fun and fresh.

Anna: I’m not quite sure what to make of Dehaka. He’s been gaining steam on the pro circuit as a disrupting force and good synergy pick. But it seems like in pugs, where you don’t have that coordination, he can’t seal the deal. I haven’t played him myself much just yet, but I’m excited to give him a free rotation spin to see just what his deal is!

Mitch: He’s probably the first hero whose debut I’ve been disappointed by. He can drag heroes and do some AOE. That’s about it. If he’s targeted and you have no healer, you need to spam his trait to heal him. As a result, his trait it rarely full which makes it feel kind of useless. On his own, he’s really not that tanky but his arsenal is pretty limited so he’s not all that offensive either. Plus his one super awesome ability (the tongue drag) can annoyingly hit minions instead of heroes, meaning you can basically waste your one good ability. My overall impression was that he felt like a worse version of Diablo, to be honest. All that being said, if you play strictly vs AI, he can actually be a little fun. His design isn’t really the bad part of the character, it’s the implementation. When you’re in AI mode and can worry less about finicky details, that design sticks out more. He really needs some tweaks to work outside of AI matches, though.

Mitch: Diablo… If you get Dehaka and just sorta think, “Eh, could be better” then try Diablo. Because it can be better. Diablo is tanky and disruptive and he definitely grew on me after my first (not that great) impression. Be careful of how you use his two displacement abilities. Charging into an enemy can be fun, but can also help them if used at the wrong angle. Try to knock them into a wall (so you can then toss them) or toss them and then knock them back toward your team (or towers). A well-placed toss is one of Heroes‘ finest plays.