When discussing Diablo 4 and what classes we’d like to see in it, the first thing to realize is that each new Diablo game has introduced new ones. While the game started with a fairly simple warrior, rogue, and sorcerer trio, at this point we have quite a few classes across the three games in the franchise.

So if Blizzard were making Diablo 4, would we see the revival of our Diablo favorites or a set of all-new classes to choose from? Let’s take a look at the classes we’ve seen over the years and think on what might come next.

The classes we’ve seen so far

The classic Diablo started with just three classes: Warrior, Rogue, and Sorcerer. Monk was added in the Hellfire expansion, and the game files also included Barbarian and Bard, but neither was playable in the final version of the expansion.

Diablo 2 upped the ante with more options that went beyond the original trio. The game launched with Amazon, Barbarian, Necromancer, Paladin, and Sorceress, while the Lord of Destruction expansion added Assassin and Druid. This is a broad selection of classes that absorbs the original three to an extent — the Sorceress replaces the Sorcerer, the Amazon subsumes the Rogue, and the Barbarian is the Warrior amplified.  It also adds more, with the Necromancer, Paladin, and Assassin as variants of Sorcerer, Warrior, and Rogue. Then there’s the Druid, offering a playstyle not yet seen in the franchise.

For Diablo 3, we get another broad assortment of classes:

That brings the count of classes for Diablo 3 up to seven, the equal of Diablo 2.

So at this point, I think it’s fair to ask, would Diablo 4 even need new classes?

It would be tempting to simply go through and cherry pick the best classes from the past three games. Of the original trio, the Warrior and Sorcerer have been thoroughly replaced and I think they can be safely retired. I’d like to see the Rogue make a return, with some updates: Diablo hasn’t really had a stealth-focused character class, and that could definitely be a fun addition to the franchise. Load Rogue up with all the ideas of the class from various other games, letting them be either sneaky dagger-wielding combatants or bow-using snipers, with the ability to attack out of stealth and lock enemies down.

But if I were doing just a list of dream classes drawn purely from the past, it would be as follows:

I feel like these classes combine elements of iconic Diablo with distinctiveness and/or essential standing in the series. By now, the Barbarian has utterly replaced the Warrior as the melee combatant who doesn’t use magic and the Fury mechanic of Diablo 3 is an excellent one that should be carried forward if at all possible.

The Assassin and Monk both do the agile martial artist in different and complimentary ways, and while I miss the Rogue, with these two in the game you don’t really need a Rogue class. Similarly, with Demon Hunters you’ve got someone doing the Amazon’s niche as well or better, plus hating demons is their entire deal, which fits neatly into Sanctuary’s story. I chose both Crusaders and Paladins because quite frankly I like the idea of two rival groups of Holy Warriors getting in each other’s faces. They both believe in Zakarum but that’s about it. Druids, Necromancers, and Wizards are there for their unique take on magic: Druids are a jack of all trades while Necromancers and Wizards are both very different in terms of how they use their powers.

But what about classes I didn’t list? What about the Amazon, Witch Doctor, or Sorceress? Well, clearly, I think Wizards handle the Sorceress. I think both Witch Doctors and Amazons could absolutely be cool classes to feature, but I had to cut somebody.

Or did I? Would a Diablo 4 with eleven classes be feasible?

But there are still more class possibilities

And that ignores three classes that only appeared as NPC classes in Diablo 3: the Templar, the Scoundrel, and the Enchantress. The Enchantress could easily be folded into the Wizard, but the crossbow-wielding Scoundrel is clearly an updated Rogue (and remember what I said about wanting Rogues back), and the Templar is yet another holy order that suffered greatly from the events of Diablo 3.

It might make more sense to fold the Paladins and Templars together, or simply to have Templars replace Paladins as a playable class, since there’s a lot more recent lore about the Templar order while Paladins haven’t really been heard or seen in the recent game. But perhaps there’s room for all three orders, even if not all three are playable. As for Scoundrel as a playable class… I’d personally love it, but we’re getting unwieldy here.

And I didn’t even mention the Bard from Hellfire has never actually gotten the Diablo treatment. 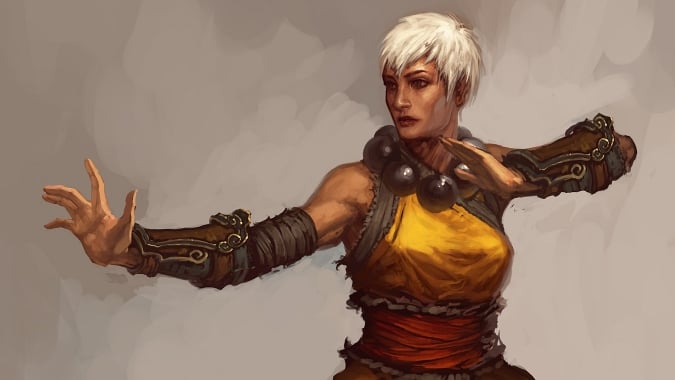 Remember, each game has introduced new classes. The Demon Hunter, Witch Doctor, and Wizard were new in Diablo 3. None of the original classes returned in Diablo 2. So if we limit ourselves to just returning classes, we lose out on entirely new approaches to the game.

So let’s break it down. What does a Diablo game need? From the beginning, we have three broad archetypes — the Warrior was a front-line melee fighter, the Rogue was a ranged physical damage character, and the Sorcerer was magic-user capable of big AOE. These archetypes have been refined and focused on by other classes in different ways — Assassins, Monks, Barbarians, Crusaders, and Paladins all do melee in different ways, but it’s still the melee role.

Diablo 4 could handle this in various ways. It could take the WoW approach of having one class with three specializations — you could have a Holy Warrior class with Crusader, Paladin, and Templar specializations, for example. You could have a Barbarian class with Berserker, Juggernaut, and Destroyer specializations, each focusing on one aspect of the class. But that’s not the only way to handle it, and a simple approach like the original Diablo could also work, where you just have a melee class, a ranged archer class and a spell class and let players customize what they want to do with talent trees.

In the end, I think there are enough classes in the franchise that the designers could stick with the original classes or go in a whole new direction, if they wanted.

But if there aren’t Barbarians I’m not going to play it.