WRUP: Blizzard Watch is gearing up for one spooky weekend

We’re nearing the end of Spooktober, but that doesn’t mean the fun’s about to end — the opposite, in fact! This weekend is Halloween weekend, and that means it’s the perfect time to have a little spooky fun and really celebrate the spirit of the season.

How exactly are we, the Blizzard Watch staff, celebrating the spirit of the season? With games, movies, tricks, and treats! Read on for all the deets, as we celebrate a very spooky WRUP. Up first, Liz Harper. 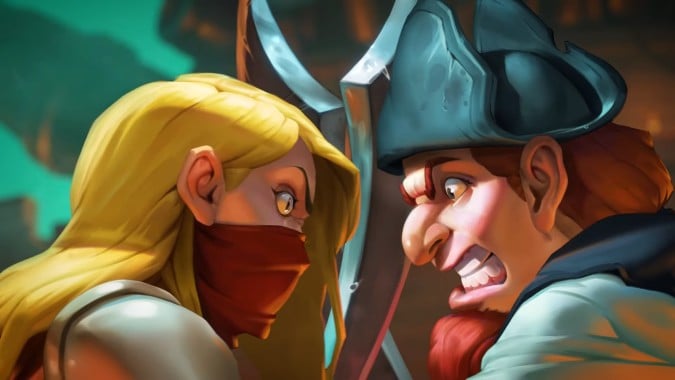 Elizabeth Harper: I am continuing to play Hearthstone out of spite, as if I could keep playing it and in so doing quantify my dislike for it and reach some kind of understanding. I feel like this is a game I should like (sometimes I do!), and if I keep playing it I could either (1) win forever and never have to return or (2) fully commit to either liking or disliking it and leave this futile internal conflict behind me. It’s a complicated situation over here. Also I am still playing Outer Worlds, where I am working through the Peril on Gorgon DLC, which started out with a severed hand and a mysterious message being delivered to me, which led me into a (kind of) abandoned research facility to search for a scientist’s journal, only to discover a dark corporate plot to create a superdrug that would make workers more productive and energetic because they wouldn’t need to sleep as much.The facility is now overrun by marauders who attack you on sight, so I’m sure you can just guess how well that went. Right now I’m looking for Charles from accounting. All I know about him is that he has a rocket launcher, which is some kind of modified mail sorting device that he puts explosives in. It’s probably fine.

Not really doing anything for Halloween over here. I used to like to go to the movies on Halloween, because they usually had some neat holiday showings, but I’m still not comfortable with movie theaters. Maybe I’ll do my own Halloween movie night, or maybe I’ll just keep playing video games. Either way, it’s a good time!

Andrew Powers: This weekend is Halloween and that means…. I don’t know, there are not really any kids in my area, they’re all teenagers or up. We have a pumpkin we might carve, and we have a bowl full of candy in case people knock on the door, but otherwise, people in our house will eat it

I watched all the good TV that came out last week, I finished the Hearthstone Mercenaries story tasks, Animal Crossing’s and WoW’s patches don’t come out until next week… this is a pretty boring weekend.
Maybe more SW:TOR, there are now Genesis and N64 games on Switch (but not a very wide selection, I own more games than they offer), and I’m reading The Haunting of House Hill, that the Netflix show is based on. The book is quite different than the show, but so far, the show is better.

Mitch “Mitch” Mitchell: We’re approaching Halloween weekend, and I want to know what all of y’all are up to on this, the spookiest of weekends. For my part, I’m going to be spending part of Saturday watching scary films (I definitely did not make it through my list before Halloween), then Sunday will be spent trick-or-treating with the family and followed up with an outdoor movie night. Friday, uhh… I don’t actually remember if I have plans, but I do have the day off, so it’ll be a whole lot of Horizon Zero Dawn for me when I can. 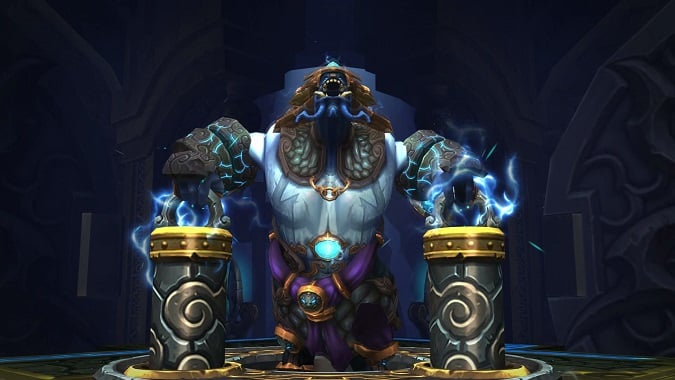 Deb Montague: Another week and another 0-6 on my mount runs. You know, one of these is going to drop and I’ll accidentally delete it because I’m so used to not seeing anything. Transmog is still, surprisingly, dropping from places like heroic 25-man Throne of Thunder. Wait. How did I not have these bracers or that cloak? My guild’s annual Halloween Tmog contest is Friday in Stormwind. This marks the start of year number 6 of monthly transmog. I’ve got a costume but if these world drop pants would just drop from Mana Tombs where there’s a 4% drop rate, I’d be ever so happy.

Technical difficulties prevented a pulp C’thulu DnD on Sunday night so we hope to do it this week. I don’t really “Halloween” it up but I will dig out my “Tim, the Enchanter” hat to answer the door. This weekend is sportsball and Godzilla/Mothra movies. I miss the original SimCity where you could have Godzilla destroy Tokyo. “Someone” needs to write the movie where he swims through the Great Lakes and attacks Chicago. Why should the east and west coasts have all the fun?

Anna Bell: We’re going trick-or-treating! Both kids have costumes that incorporate masks — my son is a train conductor with a mask patterned in red paisley to match his bandana, and my daughter is a “cat-witch,” so of course her mask has whiskers and a cat smile. They are beyond excited. We also have to carve our pumpkins, but between the warmish area we live and the bold as brass squirrels, I don’t like to do that til last minute.

In terms of gaming, I’m playing a few spooky ones… Darkwood, Pacify, and Outlast have been mouldering in my Steam library long enough! 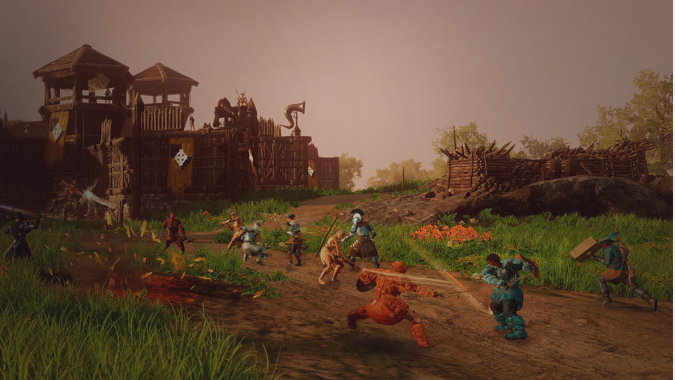 Ted Atchley: This month has flown by and Halloween kind of snuck up on me. I’m not prepared, but I still have everything in my closet for a decent Jedi Knight costume. What? You don’t have a set of Jedi robes and a lightsaber in your closet? My son is going as Shy Guy and my daughter as Sandman (from DC Comics). She’s gotten heavy into the DC fandom after discovering the show Gotham on Hulu. We’re going to a Trunk-or-Treat at our church on Saturday and then trick-or-treating around the neighborhood on Sunday.

In gaming news, I’m high enough level to run the Amrine Excavation in New World. It’s the Deadmines or Wailing Caverns of the game. New World uses the Classic/Burning Crusade era approach for finding your group—yell in world chat and hope for the best. Oh, what I wouldn’t give for a true Group Finder feature.

Matthew Rossi: We’re not doing our usual D&D game this Friday, so I’m basically just kind of playing the same games I’ve been playing this whole time. Pathfinder WOTR, Diablo 2, Tyranny, some WoW, and dipping back into Baldur’s Gate 3 Early Access although man, I really wish they’d just put Barbarians in already. I’m also curious about Solasta, which is a 5e derived CRPG that uses the D&D 5e SRD for its ruleset, and might be getting that soonish.

Also reading a lot of Fizban’s Treasury of Dragons and considering design ideas for the next Blizzard Watch campaign.

Liz Patt: I’ve been picking up alts in D2R so I can experience every class in the game. Plus I need to start wrapping up my Ethereal farming in D3 and prepping myself to dive back into WoW for the 9.1.5 drop (more alt time for meeeee).

That said, I am spending most of my weekend in the real world! Friday I’ll be in meat space with my family to celebrate my birthday and Saturday I’m holding to an annual tradition of getting my hair cut and dyed some fascinating colors by a wonderful friend. 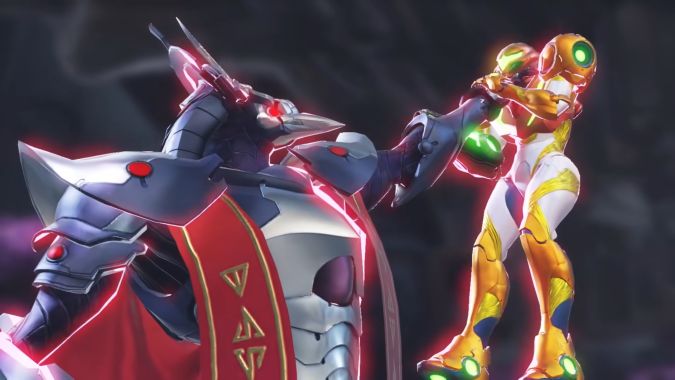 Phil Xavier:  I’m still playing Metroid Dread! After beating the game on Normal, I’m now playing on Hard and seeing if I can finish it in under 4 hours, while performing as many sequence breaks as I can — three down so far!

Meanwhile, World of Warcraft has me firmly in its clutches again. Since I’m up to three max level characters, WoW time is starting to consume my “other games” time, and it’s a real struggle. I think I’m gonna need to adopt a schedule.

Joe Perez: Catching up on my reading with some Fizban’s Treasury of Dragons. Finishing my Volo, Guide to Monsters commander deck and getting ready to take it for a test spin, and then some video games. Working my way through Metroid Dread which is supper fun, but also very frustrating in all the good ways, and then F.I.S.T. Forged In Shadow Torch, which is a Metroidvania where you play as an anthropomorphic bunny with a giant mechanical mech fist that you can punch your enemies into oblivion. I’ve also re-installed Guild Wars 2 because I had a bug to play as the Necromancer again and figured it’d been long enough that it might be a bit “fresh” for me.

Cory Taylor: Since our second raid night falls on Halloween, we’ve decided to call it off. Which means that Mythic Ner’zhul will haunt the Sanctum of Domination for another week. We’ve been getting really close, having had 5% and 7% wipes on our last night of attempts on him. Just too many of us getting yeeted off. Next time though, I’ve got a really good feeling about next time.

And that’s our weekend here at Blizzard Watch! I hope you all have a fun, spooky time no matter where the weekend takes you. And if you have a second, what not tell us — What aRe yoU Playing?

Blizzard Watch is made possible by people like you.
Please consider supporting our Patreon!
Filed Under: Spooktober, What Are You Playing, WRUP
Advertisement