Lunara joins the hero rotation for the first time this week 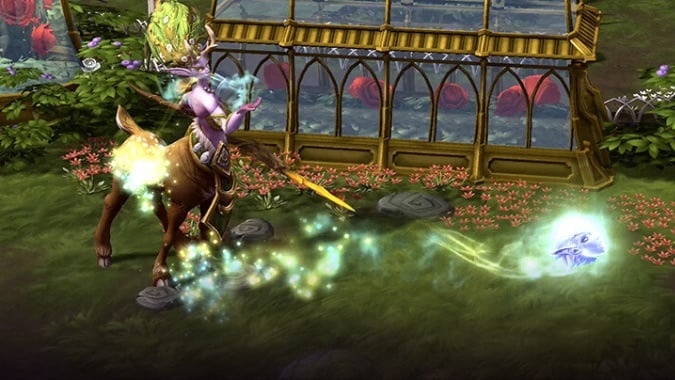 Another week in Heroes of the Storm brings us a fresh rotation and a new batch of sales, including the first time Lunara is on the freebies list. She was released only a month ago so this feels a bit quick to us — but Mitch points out that it’s standard for new heroes to be in the rotation three weeks (or so) after their release. So perhaps this feels fast because things have been so quiet on the Heroes front over the holidays. At any rate, it gives the average player a chance to give her a try (so long as they’ve reached player level 15) and decide if she’s worth the 10,000 gold pricetag.

For those of you who picked up Genn Greymane last week — or are considering picking him up when his price drops to 10,000 gold next week — we have a new guide for our favorite Worgen (written by our favorite gaming poet, Mitch). Be sure to check it out to get gameplay tips or a feel for how he plays before you buy him.

So who will you be playing this week? Let’s dig into this week’s free heroes and sale heroes alongside the team’s commentary — and, as a bonus, some speculation on the next heroes we expect to join the Nexus.

We finally have some hints as to which heroes will be joining us in the future (if the Heroes team holds to its regular schedule, we’ll have another new hero in two or three weeks). This afternoon, @BlizzHeroes posted this teaser:

While that’s not a lot to go on, it is something. We’re pretty sure that first voice is Grey DeLisle, who plays the female Wizard in Diablo 3. The second, however, we’re less sure of.

Anna: Maybe KelThuzad? KT, Mekkatorque, Zul’jin and Za’Muro are the only ones left that were already announced — back at BlizzCon 2014? — but not followed up, I believe.

Anne: Well it doesn’t have any vocal effects on it yet. throw an echo and some distortion on it and that…is probably KT.

Mitch: I would squee with glee if it were KT.

In short, your guess is as good as ours on that second teaser voice. So now let’s get down to the regular routine with a new weekly poem from Mitch:

Has a great mane,

And makes for a great main.

Next up, this week’s hero commentary:

Anna: Recently Falstad has been on my radar as a fun little pickup. Since the most recent batch of maps have been more point capture, his global presence can make a big difference. He does a ton of DPS, but in particular being able to jump from altar to altar with minimal downtime on Towers is pretty invaluable. You do have to be very careful to not jump into situations where you’re 2+v1 (judicious bush usage can help with this) but Falstad is a lot of fun.

Genn Greymane — check out our guide to Greymane

No, this just-released hero isn’t on rotation this week, but after some time to play him, we’ve got thoughts all the same.

Mitch: Greymane is awesome and you should ignore the rest of this list and just play him instead. Shell out the gold or the money, whatever it takes. He’s a lot of fun and I literally have never leveled a hero as fast as I’ve leveled him — I’m 1/3 of the way through 9 and already the hero with my most takedowns at 300+.

Anna: I haven’t been playing him. It seems like every time I get mega hyped and want to play a hero out of the gate they’re terrible and vice versa.

Lunara — check out our guide to Lunara

Anna: Whoa, Lunara is on rotation already? I’m really surprised, especially since her win rate remains dead last of all the heroes, according to HotS Logs. If you play her, make sure to tab around to different targets. She’s at her most effective with her trait DOT on many targets rather than attacking just one or two heroes. Her movement can make some a little nauseous, though… if you’re prone to motion sickness, I definitely recommend you unlock your camera (press L in game). If you’re not used to it an unlocked camera can be a bit fussy, but in this case also less barfy, which is way more important.

Mitch: Lunara is notoriously bad right now because she has a terrible win rate. You know what I say to that? BAH! She’s fun and I was quite surprised when I stopped playing her in favor of Greymane because I don’t normally like Assassins as much as I liked her. The trick is to keep your distance and spread your poison around. She’s got a bit of a learning curve but I’ve found myself able to top the hero damage of many games just by poking the enemy team consistently.

Alex: I echo Anna’s surprise at Lunara being on the rotation so soon. She’s one of the newest heroes in the game! While I do quite enjoy playing her and think she’s a cool character, the Heroes community at large is under the impression she isn’t very good — and her winrate reflects that. If you haven’t purchased her yet, this might be a good opportunity take her for a spin and see if you can tolerate just how squishy a character she is. Beware Nova: she will ruin your life.

Alex: Nazeebo is one of my favorites, yet I don’t play him very much. He’s a Specialist and I have quite a few Specialist favorites. When I get a daily to play one, I often pick Zagara, Sylvanas, or Sgt. Hammer over Nazeebo, because I love all of them. And Zagara is also on this week’s rotation, so… eh! Nazeebo starts out squishy, but if you take his Death Ritual talent at the start of the game, you’ll have more health than tank heroes by the late game. His Zombie Wall is great for setting up ganks on an opponent, but be careful about trapping your teammates. An important thing to remember when playing Nazeebo is you can push W a second time to dismiss your Zombie Wall. If you’ve trapped a teammate in the circle, don’t leave them there for the full duration — dismiss the zombies and let your pal out of the cage.

Anna: Zagara has gained in popularity in recent weeks. The vision afforded by her Creep trait helps a lot on those same maps. She’s always had very long range, excellent poke and good siege ability too. Oddly, while Falstad is prized for his global presence, Zagara’s heroic ability affording her mobility, Nydus Network, is almost never chosen. Nydus is relatively clunky while Devouring Maw can split up a team and set up powerful combos. Even when you’re pugging, Maw is the clear choice.

Mitch: She’s on free rotation so often I don’t know what else to say about her. She should really just be made a free hero for everyone at this point.

Liz: I think Li Li was the first hero I bought. She’s a very easy Support to pick up because her abilities don’t require any targeting. Both Healing Brew and Jug of 1,000 Cups target nearby, low-health allies, prioritizing those with the lowest health, so all you have to do is click. She’s really on the rotation so much because she’s such an easy pick for Heroes newbies — if you haven’t played much Support and need to knock out some dailies, Li Li’s perfect.

Anna: I play Tassadar regularly, but usually in AI and built as a mage with talents. I play him in QM with a support build, but he’s a bit less effective than other healers in general, and they introduced that bit of MMR where (allegedly) they match up the numbers of Support v Support. If you’re trying to play Tass as a mage and go up against a Li Li or Malf, your team is not going to love you.

Alex: I feel like I should say something about E.T.C. and/or Stitches, but I find tank heroes terribly boring. If I need to complete a Warrior daily, I usually go with Sonya because she’s essentially an Assassin with more health. ETC and Stitches both feel too slow for me. That said, some people like characters like that — and between them, E.T.C. is probably marginally more fun to play than Stitches. Though Stitches’ Hook is pretty rad once you get the hang of it. Being new to Stitches and missing every single Hook is not so rad.

Anna: I’m with Alex re: tank characters are boring. I think he and I have a lot of overlap in our playstyles so we’re fighting over the Specialists and ranged Assassins.

Mitch: I love warriors! But…Greymane. No joke, he’s surpassed Tyrael on my list.

Alex: There are only two warriors I like: Sonya and Johanna. Sonya is a quick bruiser instead of a traditional tank. Johanna feels like she has control of the battlefield in ways other tanks don’t. Her damage is awful, but that’s fine, because you still feel like you’re in charge of what’s happening.

Anna: I love Sonya too. She’s been getting a lot more play in tournaments as the meta shifts from a flat two Warriors to a tank and a bruiser comp, too… and most tournaments feature that slick comic book skin that’s on sale this week.

Mitch: Stitches is a distracting hero because he’s got dat bod that you can’t resist. Seriously, look at that thing! And Bikini Stitches? Oh man, just try to take your eyes off him once you’ve seen him (no, really, it’s so horrifying that you almost can’t look away). Playing as Stitches, however, is a ton of fun. A good Stitches can use Hook to pull enemies away at the perfect moment to disrupt their entire strategy. And the first time you ever stick a hero in your belly and throw them up behind your gate, you’ll be laughing so hard that you’ll be…. in stitches.

Dan: I picked up Stitches in the Winter Veil bundle and have quickly grown to like him. He takes some getting used to with the timing of his hook skill shot followed by Slam or Devour. But the right combo can be magic and you can hook a fleeing enemy into an ally’s AOE heroic ability. Or swallow an enemy whole and spit them out behind your gates.

Rexxar — check out our guide to Rexxar

Mitch: Avoid Rexxar like the plague. I liked him for a little and then I realized I kind of hated him. I’d say playing as Rexxar is roughly equivalent to finding Rexxar in Desolace during the Vanilla WoW Onyxia chain on Horde side. Wasn’t that a heap of fun?